By clicking “Accept All Cookies”, you agree to the storing of cookies on your device to enhance site navigation, analyze site usage, and assist in our marketing efforts. View our Privacy Policy for more information.
PreferencesDenyAccept

Cattle in food production often develop diseases and are unable to perform their natural behaviors. This article provides a brief overview. 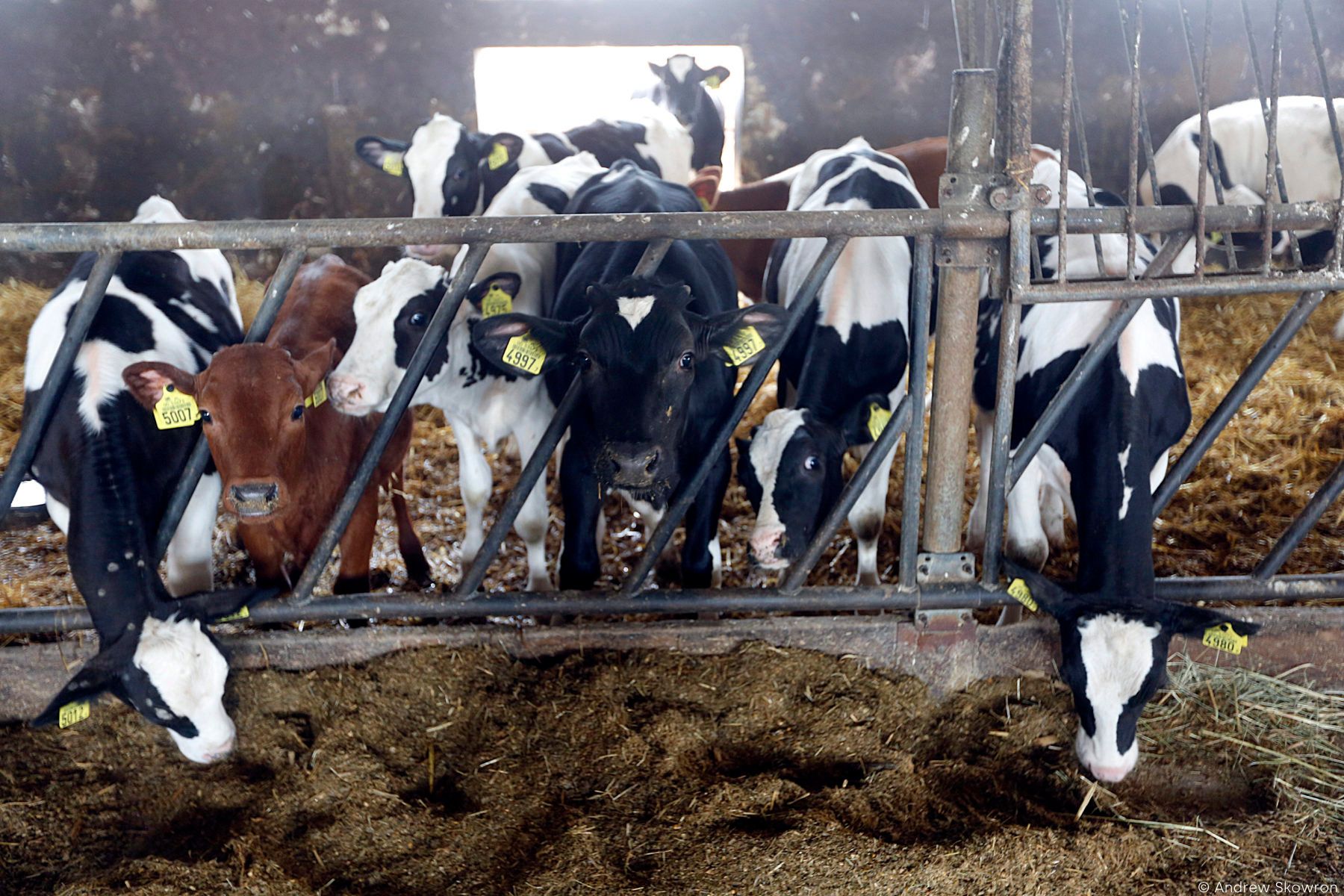 Cattle farming in Germany is shifting to fewer and fewer farms with ever larger groups of cattle (1), (2). The animals kept are bred specifically for the use attributed to them: Meat and dairy breeds maximize profit. This one-sided breeding for fast growth or high milk yield results in health problems for the animals. In addition, male calves are considered worthless in milk production (3).

The usual husbandry systems largely disregard the animals' needs. Instead, selective breeding, interventions on the animal itself, and farm management measures are used to adapt the animals to the housing conditions. This is problematic from an ethical perspective - cattle on farms suffer from painful diseases, injuries and behavioral disorders (4).

In addition to the adverse housing conditions, cattle are transported several times in their short lives. Farmers not only sell products such as milk and meat, but also many live animals abroad. These then have to endure long transport routes. But even the cattle that remain in Germany are often not spared this, as the farms are highly specialized. The cattle have to move several times in their lives. In the end, they have to make their way to the slaughterhouse.

The number of cattle kept in Germany has been falling continuously since the 1980s. While there were 20.8 million animals at that time, there are currently just under 11.1 million (5). Around one third of them are used for milk production, another third for fattening or as breeding stock. The last third are calves and young cattle that face a future either in meat production or in milk production (6). Only about 7.6 percent of all cattle live on organic farms (7).

Fewer and fewer farms are now keeping more and more animals. Whereas in 2010 there was an average of 87 cattle per farm, in 2021 the figure is already 104. This trend is even more pronounced in the case of "dairy cows", where the number rose from 46 cows per farm to 72 (8).

Only about 31 percent of cattle have access to pasture, and for an average of 6.4 months per year (10), (11). The Scientific Advisory Council for Agricultural Policy at the German Federal Ministry of Food and Agriculture (BMEL) suspects that the number of animals that can actually go out to pasture and the average length of time they stay there are significantly lower than the reported values. It is assumed that there is a bias in the data collection (12).

So-called dairy cows are bred for extremely high milk production. While the average milk yield 50 years ago was 2600 liters, today it is already more than 8000 liters. With the increase in output, udder and hoof diseases are also becoming more common (13).

In intensive livestock farming, a cow must give birth to calves regularly, otherwise her milk flow dries up. Farmers usually separate mother and calf within the first 24 hours.  Especially the mother cow suffers a long time from the pain of separation (14).

The vast majority of so-called dairy cows in Germany live in loose housing (approximately 87 percent). Even though the number of dairy cows that have to live in tethered housing is getting smaller, it was still 13 percent in 2020 (15).

Calves in meat production are usually separated from their mothers or nurse cows after five to ten months (16). Nurse cows are cows that raise other, non-birth calves in addition to their own calf.

In both calf rearing and calf fattening, many young animals suffer from diarrhea and respiratory diseases because their immune systems do not develop until the first six to eight weeks. Due to common management practices, these diseases often lead to death (17).

The majority of all so-called fattening cattle live in loose housing, whereby the full slatted floor stalls, which are contrary to animal welfare, are still frequently found (20). Only a small proportion of "beef cattle" live in tethered housing (21). However, the Federal Statistical Office does not provide an exact number. In conventional husbandry, the animals usually do not have access to the outdoors (22).

There are still no special legal regulations in this country for the keeping of cattle over six months of age, other than the general provisions of the Farm Animal Welfare Husbandry Ordinance and the Animal Welfare Act. Only special requirements apply to the keeping of calves under six months of age. For example, calves may not be kept in tethers. Up to the eighth week of life, individual housing is permitted, after which they may only be kept in groups.

As already described in the previous paragraphs, the husbandry methods for cattle can be divided into three systems. In addition to the widespread use of loose housing and tethering, which is contrary to animal welfare, only a small proportion of animals have access to pasture at all. Even if so-called fattening calves, cattle and dairy cows lead different lives due to the different production methods, a similar picture emerges when looking at the types of husbandry.

The loose housing system was brought to Europe from the USA in the 1950s and is now the most commonly used housing system. At the beginning, almost all of the barns still had a run yard where feeding took place. Today, most farmers do without this for economic reasons. Thus, all functional units are located in one hall, which, however, in contrast to tethering, is arranged in different areas (23). The barn is divided into feeding, lying and milking areas, in between so-called traffic areas or walkways are used for locomotion (24).

Tethering was by far the most common type of housing throughout Europe until the introduction of loose housing. In most countries, tethering is now less common, although it is still widespread in very mountainous areas and in Sweden (25).

In Germany, one in ten cattle lives in tethered conditions (26). It is mainly farms in southern German states such as Bavaria and Baden-Württemberg that keep animals tethered. Two thirds of all cattle kept in Germany live there in this form. A significant proportion of the animals kept in tethered conditions never get any outdoor exercise (27).

In this form of husbandry, the animals are fixed with frames, straps or chains around the neck in the so-called tethered stall. Permanently tied to one and the same place, the animals are not able to turn around their own axis, walk or act out natural social behavior with their conspecifics.

Tethering leads to severe physical, behavioral and emotional damage. A ban on this practice, which is contrary to animal welfare, has been discussed for a long time - so far without any significant improvements for the animals. The coalition under Olaf Scholz (20th German Bundestag) wants to end tethering within the next ten years (28).

Pasture is characterized by vegetated ground, plenty of freedom of movement, natural light and forage, fresh air, and the soft soil that prevents lameness and other leg disorders. Here, cattle are most likely to exhibit their natural behavior (29), (30).

Nevertheless, due to intensive milk production, year-round confinement, also called "zero-grazing management", has become predominant (31). This ignores the fact that the free choice between indoor and outdoor areas is particularly important for the well-being of the cattle. Depending on weather conditions, time of year and time of day, cattle sometimes prefer one or the other (32).

“Beef calves and cattle” are transported to the slaughterhouse at the end of their fattening. “Dairy cows”, whose performance is declining, are also expected to be transported to slaughter. These journeys represent the largest proportion of animal transport. In addition, the cattle industry is highly specialized and divided into breeding and multiplication farms, fattening farms and milk production farms. This also leads to transport between the companies (33).

The animals are not only transported back and forth within Germany, but sometimes have to endure the particularly strenuous long-distance transport to other countries. In 2020, over 650,000 cattle left Germany, the majority of them were calves (34).

The slaughtering process involves stunning and subsequent killing by exsanguination. For cattle, stunning with a captive bolt gun and electrical flow are permitted as methods. The animal is then pulled up on a chain on the hind leg so that the so-called bleeding stitch can be made with a knife, which kills the animal (35).

Since failed stunning is not uncommon, the animals are often fully conscious while they are being killed. The failure rate is around five to seven percent (36).

According to the Federal Statistical Office, a total of 3.25 million cattle were slaughtered in Germany last year (37). So-called fattening cattle are only one and a half or two years old at the time of slaughter, “fattening calves” a maximum of eight months and “dairy cows” an average of five to six years (38). 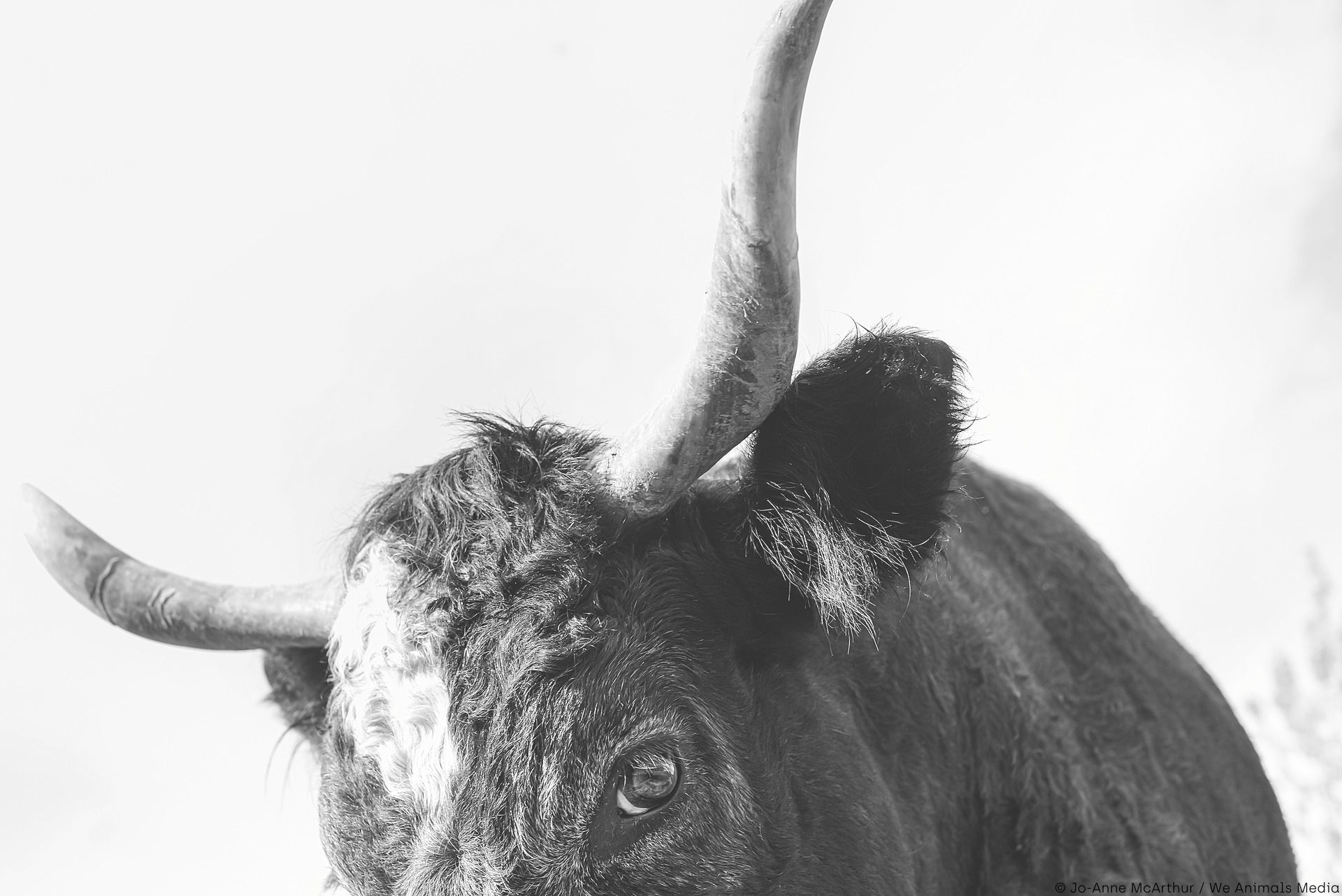 An increasing number of cattle have to live without their horns. With which arguments the farmers justify the mutilation and what it means for the animals you can read in this article.

In our glossary, we explain our use of language and why we do not use some words, use them differently, or just use them. In addition, technical terms are explained and sometimes illustrated graphically or pictorially.