By clicking “Accept All Cookies”, you agree to the storing of cookies on your device to enhance site navigation, analyze site usage, and assist in our marketing efforts. View our Privacy Policy for more information.
PreferencesDenyAccept

Our vision is a world in which all sentient beings have the freedom to lead a self-determined life and are respected and valued as individuals.

As there is still a long way to go to achieve our vision, we have defined intermediate goals to guide our work.

We are the interface between scientific knowledge and various actors and organizations of animal movements. We advise them with well-founded animal-related information. With the help of our work, the actors addressed can use current and recognized scientific knowledge in the sense of nonhuman animals.

With our expertise and experience, we support various actors of animal movements in their work and thereby strengthen them.

Use of scientific knowledge

By comprehensibly preparing scientific findings, we make it easier for organizations of animal movements and other actors to use them and to base and disseminate their work with sources.

The linguist Siegfried Jäger describes a discourse as a transmission of knowledge through time. A discourse can shape individual and collective action and thus opens up the space for behavioural changes. Therefore, a constant and growing discourse in the sense of nonhuman animals is a concern for us. Through its manifold impact on society, discourse is an important tool for achieving our vision. We do not want to lead the debate purely on personal experiences and feelings, but very much refer to scientific findings.

The position of nonhuman animals in politics and law

Profit at the expense of non-human animals

The greatest motivation for people to exercise control over nonhuman animals and humans is profit in capitalist societies. Therefore, the transformation towards an (economic) system that is not oriented towards profit and growth is an inevitable step towards the end of (nonhuman) animal exploitation.

Recognition of the entanglement of speciesism and other forms of discriminitation

In a speciesist society, the needs of humans are placed above the needs of nonhuman animals, thus justifying the injustices that nonhuman animals experience. In order to put an end to the exploitation and oppression of nonhuman animals, it is necessary to recognize in large parts of society that humans do not prevail in their environment, are not morally more valuable than other living beings and therefore cannot treat and mistreat them as it pleases.

Nonhuman animals are usually seen as a resource, objects or goods and thus legitimize their exploitation and oppression. To get away from this, it must be recognized that nonhuman animals are neither resources nor things, but subjects with their own claims, agencies, interests, needs and free will.

Not only do we want to strategically break new ground, we also want to promote a progressive organizational culture from the very beginning. It is important to us to cultivate a working culture that focuses on the person, their skills and their interests.

We work according to the following core values:

We take an anti-speciesist position. We see our work as part of movements that reject all forms of oppression of humans and nonhuman animals and strive for a free and fair society for all.

Our aim is to understand the perspectives of nonhuman animals in the best possible way in order to represent them in their interests.

We work critically, knowledge- and source-based. In our organization we pay attention to transparency.

We constantly educate ourselves and expand our skills and knowledge. This means that we are always at the cutting edge of science.

We see networking and exchange with others, also interdisciplinary, as an enrichment and essential part of our work, so that we strive for mutual support and joint projects.

We pay attention to an inclusive, non-discriminatory and barrier-free organisation and communication.

We strive to reflect, accept criticism and practice self-criticism, especially in places where we produce and reproduce discriminatory structures in our work. 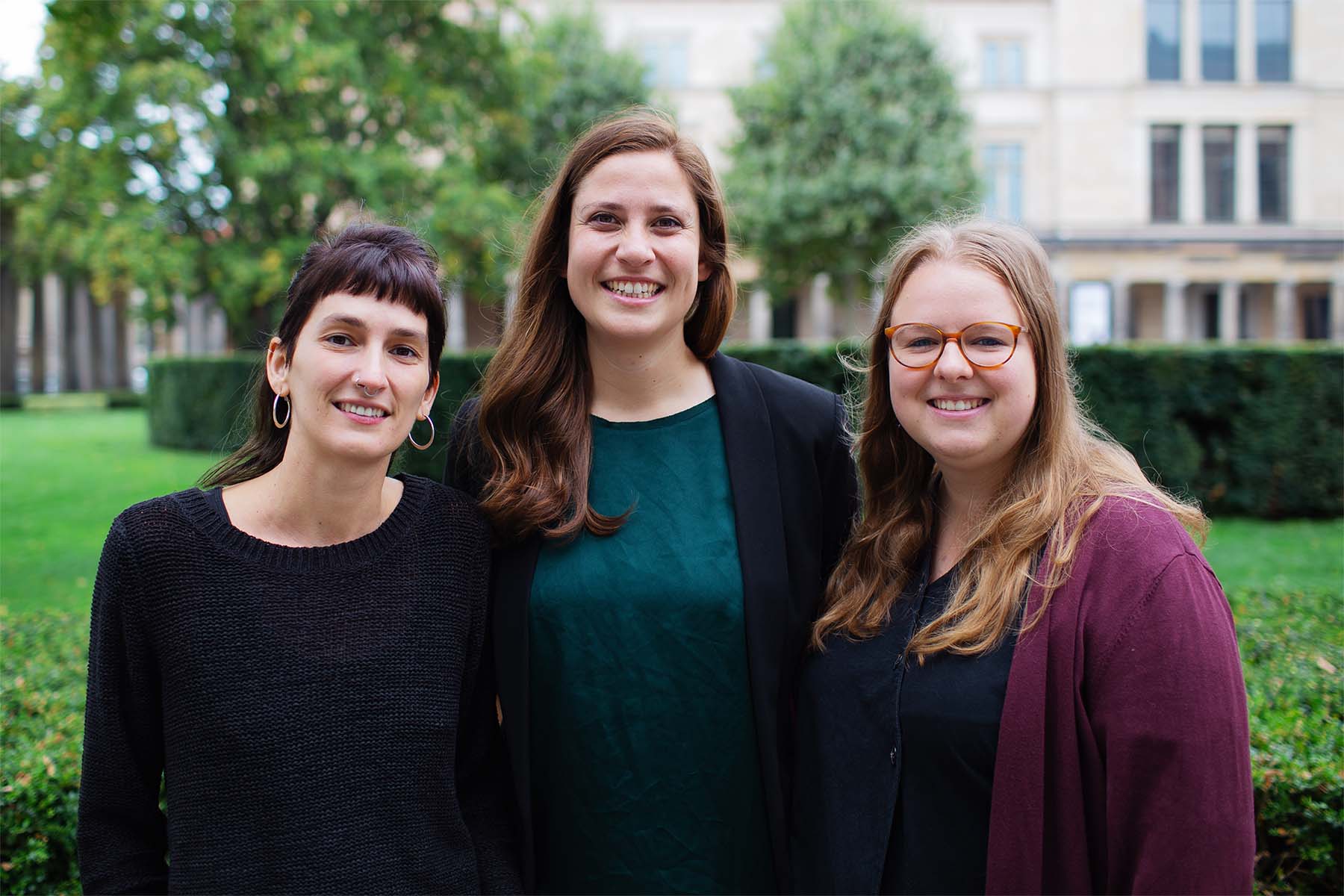 We, Eva, Marietheres and Sophie have been working together as a team for several years in the scientific department of the Albert Schweitzer Foundation. During this time, we were able to build mutual trust through open contact with each other and get to know our areas of interest and competencies. In terms of our cooperation, we found and established a common open working culture in which each can develop according to their interests and abilities.

Both through our own biographies and joint project work, which also included recent scientific findings such as emotion research, we are professionally strongly positioned with a wide variety of topics. We share a large, common knowledge base. At the same time, we complement each other with their different training and personal interests to form a comprehensive pool of experts.

The idea grew of making this knowledge available to a larger audience. We close the gap by harnessing animal-related scientific knowledge for different actors of animal movements, such as other organizations, and establish an expanded view of nonhuman animals. This was the cornerstone for Expertise for Animals. With the help of our non-profit organization, we want to be a supportive part of movements that drive the change in values to a society that takes nonhuman animals into account and enables them to lead a self-determined life. 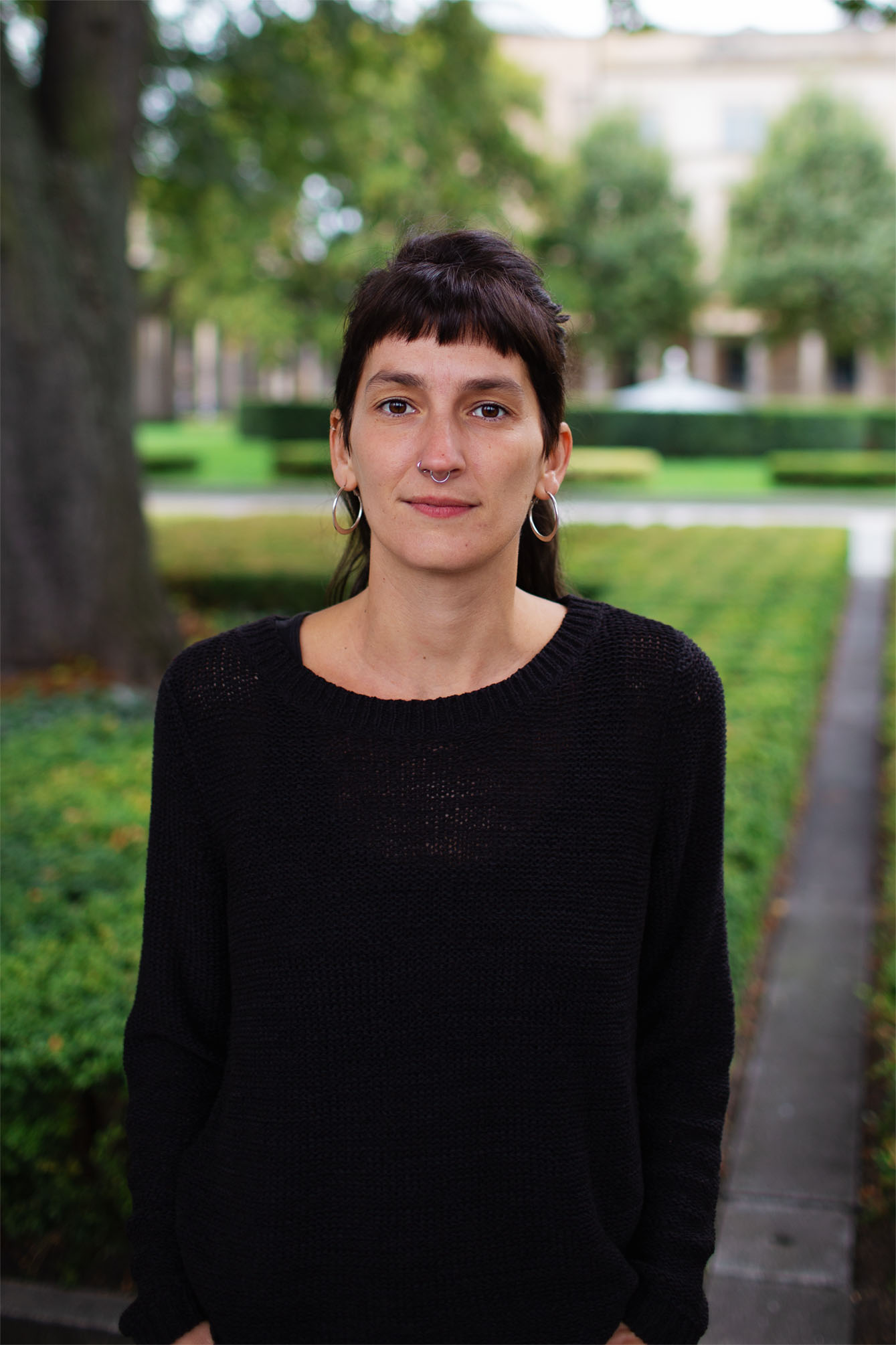 Eva has always been fascinated by the living environment and therefore decided to study biology. Already during her studies, she focused on Human-Animal Studies — the interdisciplinary study of the relationships between humans and nonhuman animals. From then on, she also dealt with questions about the human-animal relations in her free time.

She quickly noticed that science-based work was easy for her and that she enjoyed it a lot. In the Albert Schweitzer Foundation’s Science Department, she was able to further expand this qualification and her professional expertise.

With Expertise for Animals, Eva, together with Sophie and Marie, wants to create a work environment that is organized in a hierarchy-free manner and can thus develop the skills and knowledge of each person to the maximum. In this way, Expertise for Animals can draw attention to the problematic human-animal relations with great strength and at the same time work on drastically changing it. 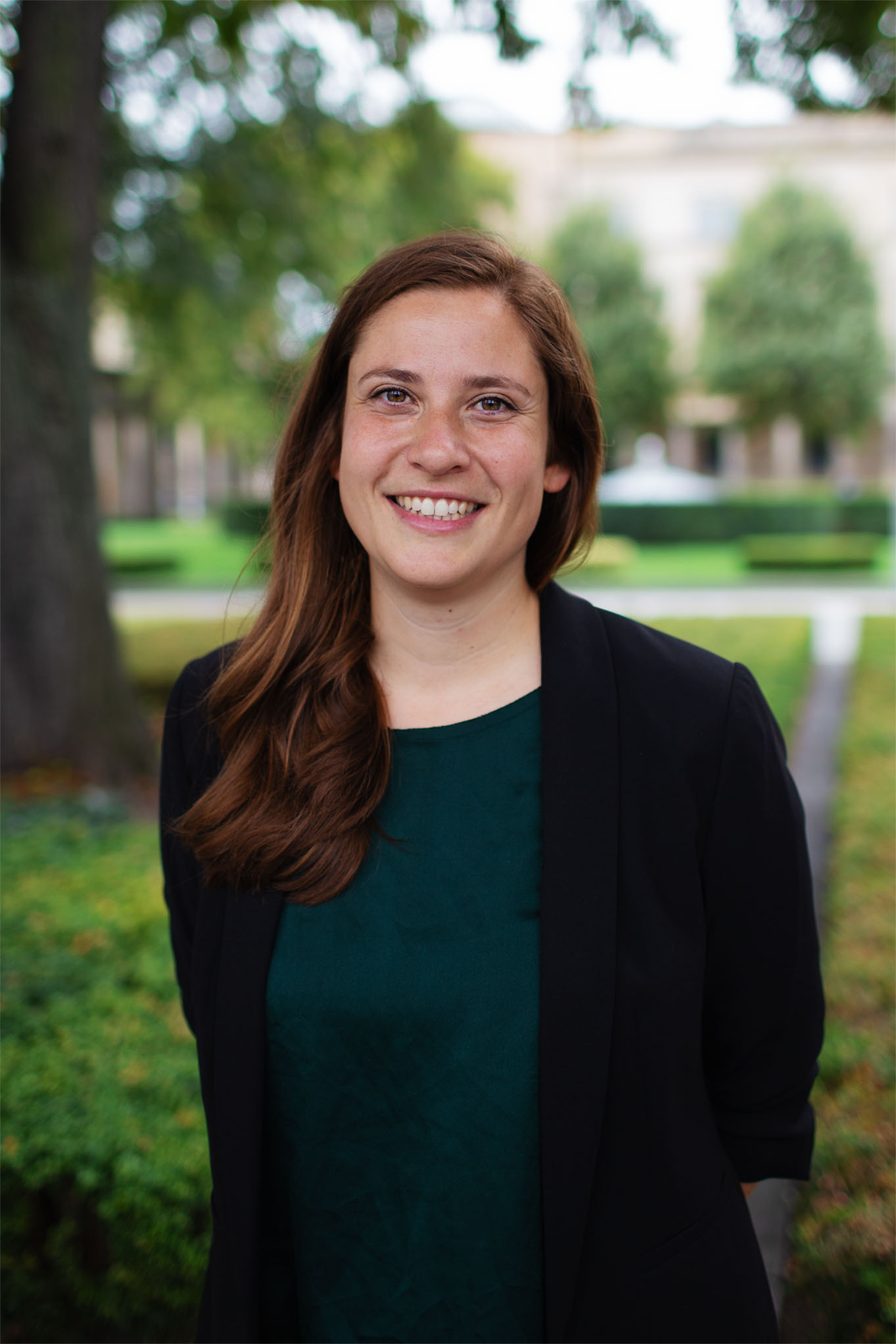 Marietheres studied veterinary medicine at the LMU Munich and then worked in the science department of the Albert Schweitzer Foundation in Berlin. There, she dealt with the scientific underpinning of animal welfare and animal rights work and the development of the organization’s knowledge. Over the years, she has been able to establish and maintain valuable contacts in a wide range of fields, both within the movements and with various scientists.

Justice is a deeply rooted guiding principle of Marietheres. It motivates her to use her work so that nonhuman animals can live free from violence, abuse and exploitation. In addition, she has an understanding of empathy that transcends species boundaries and includes all living beings. By founding her own organization, she wants to actively bring about positive changes for nonhuman animals. Together with Eva and Sophie, Marietheres sees the special opportunity to use ideas and arguments effectively for a social change towards more justice and empathy for nonhuman animals. 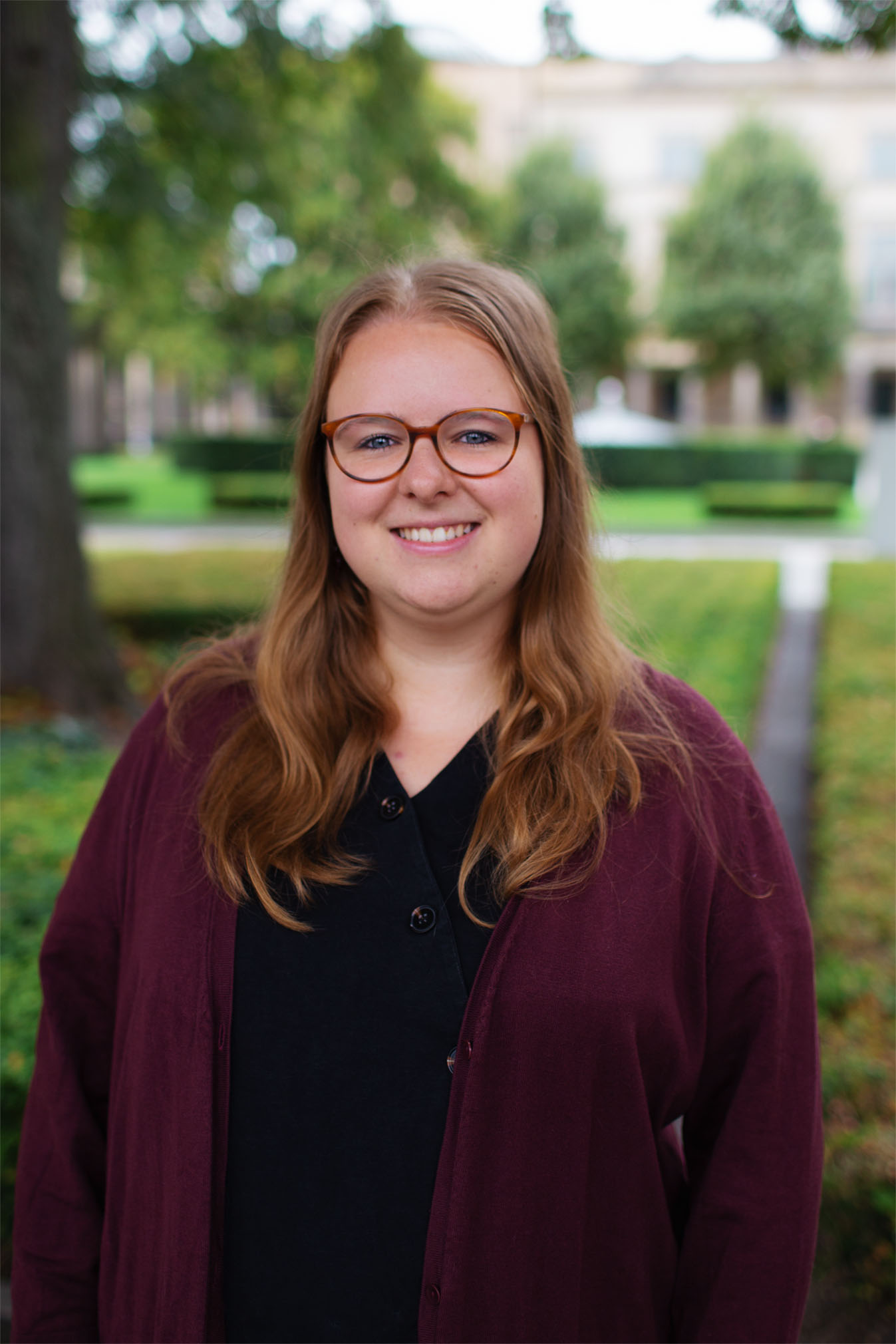 Sophie has always been passionate about nonhuman animals, so studying veterinary medicine was the logical consequence. During her studies, areas of interest and competencies in areas such as animal welfare and behavioural research emerged. In addition, animal-ethics and the power relations in which humans and nonhuman animals live (with each other) played an increasingly important role in the consideration of these disciplines. She was able to deepen these aspects during her employment at the Albert Schweitzer Foundation. As well as the handling and processing of scientific information as a research assistant at Doctors Against Animal Experiments.

Sophie also wants to contribute science-based work to Expertise for Animals. She is motivated to increase the visibility and recognition of animal interests and would like to draw attention to the entanglements with other forms of discrimination, such as racism and sexism.

Why is Expertise for Animals a non-profit Limited Liability Company?

We have dealt intensively with the question of which organizational form suits us and our activities best. In the end, we decided in favor of  the non-profit Limited Liability Company (gGmbH), as this legal form combines non-profit status with gainful employment.

How can I apply to Expertise for Animals?

There are currently no jobs available at Expertise for Animals.

What is the special approach of Expertise for Animals?

Our clients benefit from our professional support. Through the knowledge provided, they can work more informed and effective. The seriousness and validity of the campaigns, petitions, lobbying and educational work as well as their activities in animal law  increase through thoroughly researched and prepared information.

What does Expertise for Animals do?

We advise actors and organizations within animal movements (including animal welfare and animal rights organizations). We work on topics related to nonhuman animals that are affected by direct and indirect actions of humans. We prepare reports and analysis`, promote (interdisciplinary) networking and organize events on relevant topics. As a non-profit organization, we also provide self-initiated knowledge and information services on our website.

Who is Expertise for Animals?

The non-profit Limited Liability Company Expertise for Animals consists of three founders, Eva Seifert, Marietheres Reinke and Sophie-Madlin Langner. We work together as equals and make decisions according to the consensus principle. We share responsibility for the success of the organization.

The focus is on a grassroots democratic organization and coordination of the company, and we do not want to build rigid, but competence- and project-based hierarchies.